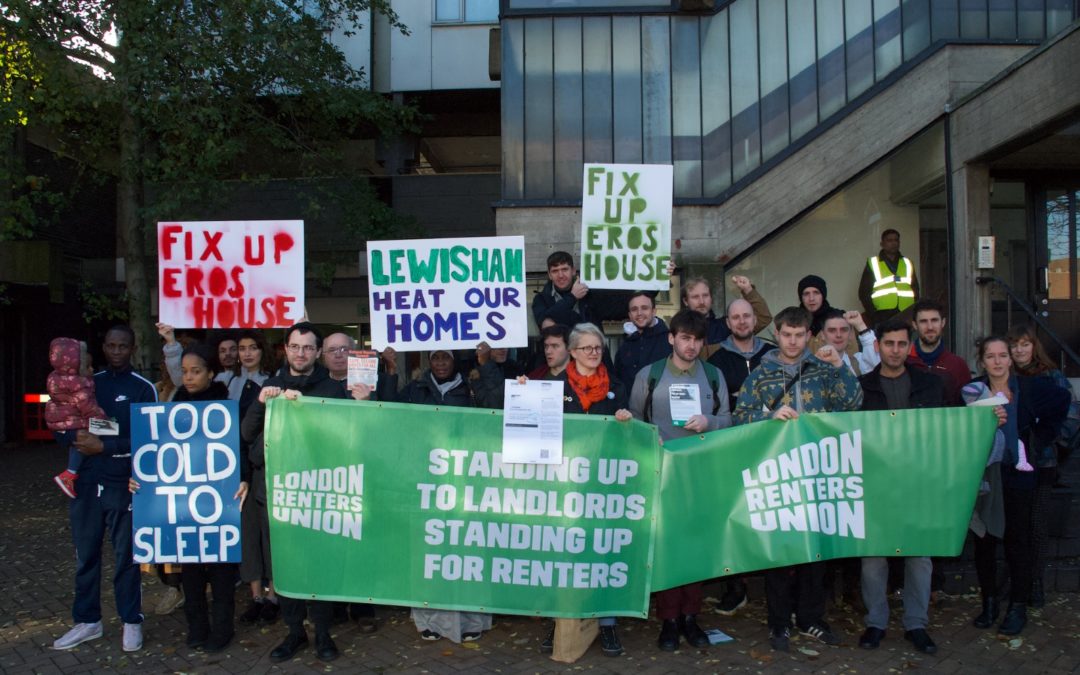 Since April, London Renters Union members living in Eros House, Catford, have been campaigning to win urgent improvements to conditions in their block. Flats in Eros House have serious issues with damp, mould and leaks. Many of the heaters in the block do not properly heat the flats and are very expensive to run, leaving residents in the cold.  Some of the heaters even pose fire safety risks, being mounted on flammable walls.

Lewisham Council is responsible for conditions in the block, both for the people it has placed in temporary accommodation there and, as the regulator of the Private Rented Sector in Lewisham, for those renting privately from the owner of Eros House.

In November, Eros House residents and other members of the Lewisham branch of the London Renters Union took public action to demand that Lewisham Council take responsibility for the appalling conditions in Eros House. Following this, we are pleased to have received some significant commitments from Damien Egan, Mayor of Lewisham.

Replying to the letter handed in at the November action, the Mayor stated his expectation that all Lewisham residents have safe and secure accommodation, and committed council officers to taking some important next steps, including an inspection of all flats and ensuring all repairs are done in good time.

Below are the key excerpts from Mayor Egan’s letter, which we are publishing for all to see.

These commitments from the Mayor are great news, and we look forward to working with the Mayor and the Council to make sure they are fulfilled and that conditions in Eros House are improved. We also hope that the council will now stop responding to renters in Lewisham getting organised by talking about setting up its own renters union, which would clearly not have the independence required to hold it to account.

Eros House residents have been determined steadfast in their demands that the council takes responsibility for the disrepair in the block. We hope that the urgent heating and safety issues are now dealt with quickly.

Key excerpt from the Mayor’s letter:

‘Let me be clear that my minimum expectation is that all Lewisham residents have safe and secure accommodation that meets their requirements as well as providing acceptable levels of property standards. One of the primary objectives of the Private Sector Housing Agency in Lewisham Council is to drive up the standards in the private rented sector by working with both tenants and landlords. London Renters Union (LRU) support of the Eros House residents is encouraging and very welcome. This collaborative approach will benefit the residents, the owners of Eros House and Lewisham Council (LBL) in striving to improve property & management standards in Eros House. I hope and trust this joint working can be expanded into the wider private rented sector throughout Lewisham….

…With the winter approaching we are concerned about the complaints regarding the state of the windows and heaters. Therefore, officers are going to take the following action: