THERE IS POWER IN A UNION! Yes DSS! Scrap Right to Rent! 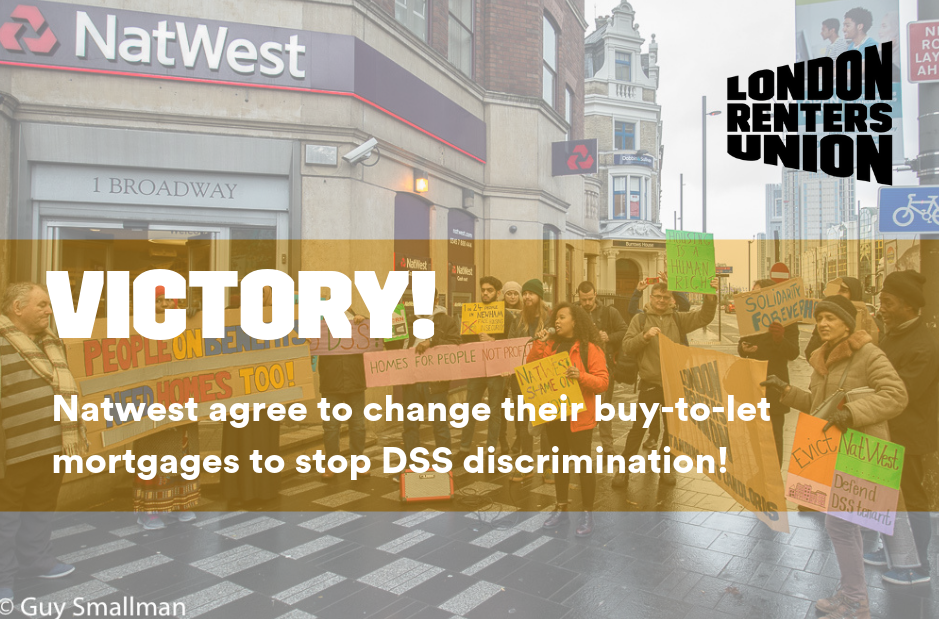 Another victory! Natwest have announced that they are scrapping the discriminatory clause in their buy-to-let mortgages that prevents landlords from renting to people claiming housing benefit.

This comes after a campaign by the LRU’s Newham & Leytonstone branch against DSS discrimination. In November, we took part in a national day of action against Natwest, alongside Living Rent in Scotland, and ACORN community union in multiple cities in England. We managed to kick up a storm, and even shut down the Stratford branch of Natwest!

Then last week we used the threat of more direct action to put pressure on Natwest to drop the clause ASAP. And it worked – they have now agreed to our demand! This is a brilliant example of how collective action gets results.

Before this change, anybody taking out a buy-to-let mortgage with Natwest would be prohibited from renting their property to someone claiming housing benefit. As many of our members in Newham & Leytonstone branch have experienced, discrimination like this is widespread in the private rented sector, and makes in extremely difficult for already vulnerable renters to find a decent and affordable place to live.

This is a brilliant victory against discrimination in access to housing. As a union we are determined to keep fighting all forms of discrimination – not only DSS, but also discrimination against people of colour, families with children, migrants (especially those undocumented), and anyone else who faces extra barriers to finding a decent place to call home.

We know that power never concedes without a demand. That’s why we have been loud and clear in our demand from the start of the campaign, and we have used the full power of organised renters up and down the country to take action and make ourselves heard. The #yesDSS case is a brilliant example of how collective action gets results!

But that’s not all that happened today! More good news for renters: today the High Court ruled that the 2016 “Right to Rent” legislation is UNLAWFUL as it not only causes racism but cannot be reformed.

“Right to rent” is an essential part of the “hostile environment” immigration policy of the current conservative government. The Right to Rent scheme requires private landlords to check the immigration status of tenants and potential tenants: if they fail to do this, landlords and agents face unlimited fines or even a prison sentence for renting to undocumented migrants. These measures are discriminatory towards people of colour and migrants.

This legislation MUST be scrapped immediately — borders have no place in our homes!

This case was taken to the High Court by the Joint Council for the Welfare of Immigrants (@JCWI_UK), who are a charity doing great work fighting for justice for migrants in the UK. Read their blog post about the ruling here.