The main role of members of the coordinating group is to support communication between different parts of the union and to support branches and working groups to understand what’s happening in the union as a whole and to have their voice heard. It also plays an important role in developing and overseeing union policies and strategies in between the union’s all member assemblies and in managing union staff. You can read more here.

In addition to representatives from our different branches and working groups, we also have up to three spaces on our coordinating group for members directly elected by the LRU membership as a whole.

We are currently electing members to these positions. If you are eligible to vote, you will have received an email with your unique voting code and the statements from the candidates. Voting is open until 8pm on December 3.

Two candidates have been nominated for three positions. Every LRU member who has a vote will have received an email containing a unique voting code and statements from the candidates. You can vote for up to two options using the form at the bottom of this page.

Arthur Pander Maat
I’ve been organizing with the Tower Hamlets group for four months and despite recently having moved over the borough border to Hackney, I intend to keep working with the TH group. So far I’ve been doing street outreach when it’s been COVID-safe to do, and helping the group set up its first structures and plan its organizing drive otherwise. While our group has a lot of work to do in terms of rooting itself in communities here, organizing with LRU has been an incredibly politicizing and energizing experience for me so far and I would like to be on the CG to support other renters through the same process.

I’m also aware that there’s an ongoing conversation in the union on how best to support those members whose borough does not have a branch (or even a group) yet, both in terms of direct solidarity now and building local renter power in the long term. While we’ve been incredibly lucky for the support we’ve received from the New Groups team and the central union, I think it’s important to feed the experiences of current members of branchless boroughs into decisions that affect them and I would make this a focus of my time on the Coordinating Group.

Josh Virasami
Hey, I’m Josh Virasami and I’ve been a member of the union for over two years. I initially was a supporting member of the Newham and Leytonstone branch (before LRU Hackney existed), cooking, listening and learning. I’m currently one of three membership officers in the Hackney branch and I’m deeply committed to growing the collective power of renters through the union, starting from the branch level. I’ve helped with campaign filmmaking, facilitating, a 16-week participatory action research local renters project, and much more over the years and love finding new ways to be involved. I’ve been participating in political movements for social, racial, and environmental justice for ten years and have a lot of experience I hope to add to the CG, and i’m super excited to continue learning and collaborating with others, to build a big, winning renters union.

Fill out the form below to vote 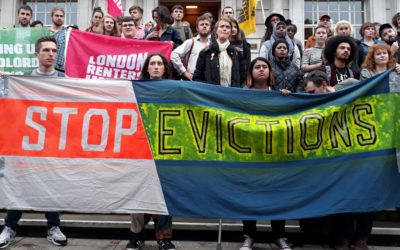 END_OF_DOCUMENT_TOKEN_TO_BE_REPLACED

Get Active online training session Get Active in the LRU Hello everyone  If you’ve joined as a member recently and want to get stuck in, or if you’ve been involved for a little while and want to know more about how the LRU works, this training is for you! These are a...

END_OF_DOCUMENT_TOKEN_TO_BE_REPLACED

What: Stop Evictions trainingWhen: Monday 29 March 2021 6pm-8pmLocation: Via Zoom. Register using the form below Are you in debt to your landlord? Are you worried about eviction? Do you want to learn how you can support your neighbours to stay in their homes? We’ve...