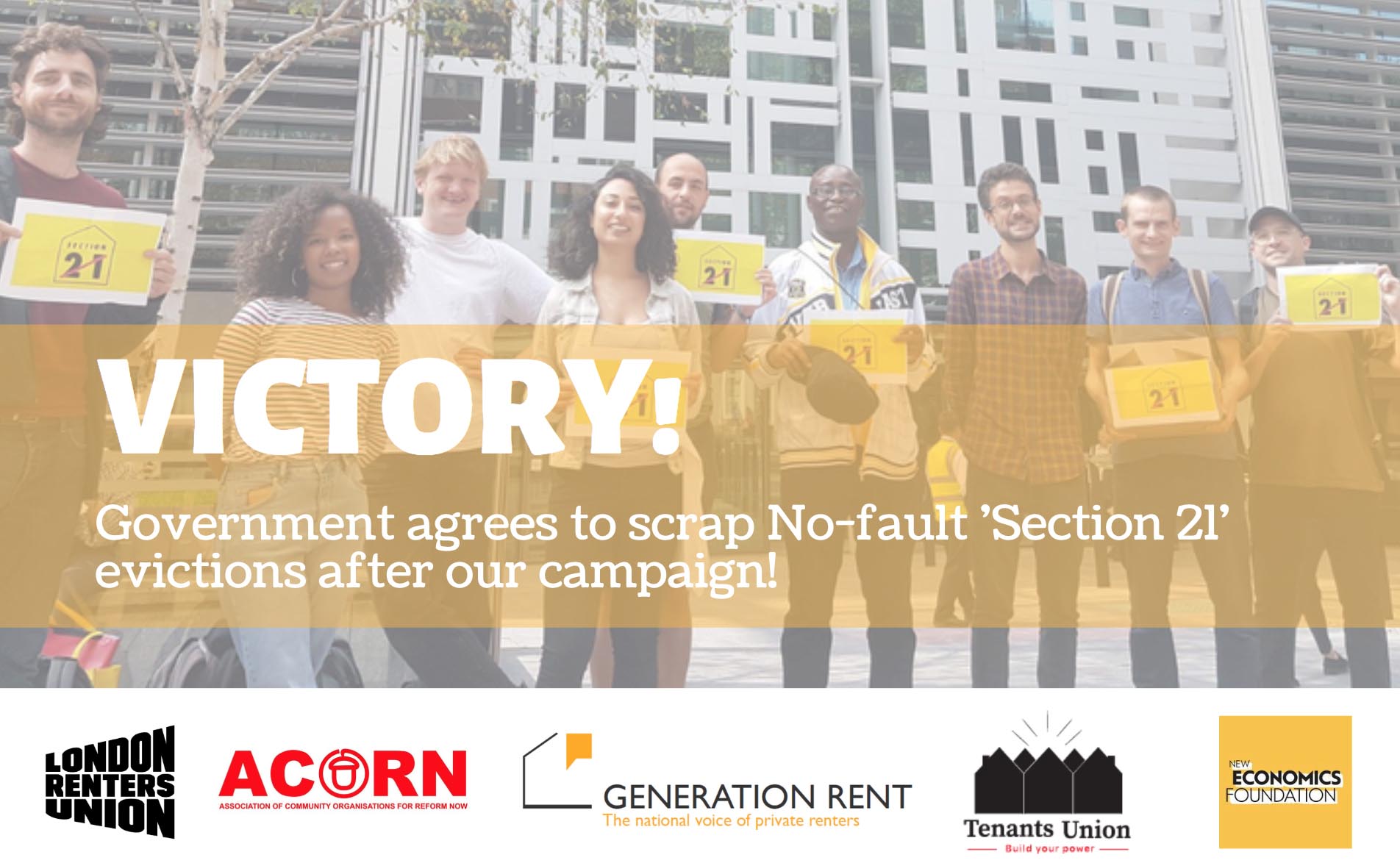 Renters unions and housing campaigners are celebrating a campaign victory today as the government announced its plans to abolish “no-fault evictions” under Section 21 of the 1988 Housing Act and introduce open-ended tenancies for private renters in England.

At present Section 21 allows landlords to evict tenants without giving a reason, making possible revenge evictions, where renters lose their homes after asking for repairs or making complaints. Since 2015, some 140,000 tenants have been victims of Section 21 revenge evictions. Section 21 is the leading cause of homelessness in England.

The campaign gained 50,000 signatures on a petition in just 10 weeks and secured the support of the Labour party, the Green Party and 13 local authorities and was widely covered in the mainstream media.

“Eleven million people in England have no idea where home will be in a year’s time, thanks to Section 21. The ability of landlords to evict without reason is disrupting educations, eroding our communities, and leaving tenants feeling powerless. The government has listened to renters and has made the right decision.”

Amina Gichinga, a spokesperson for the London Renters Union said:

“Renters across the UK are getting organised and turning anger about our rigged housing system into effective political action. This campaign success is a vital first step to ending profiteering from housing and towards a housing model based on homes for people not profit.

“However, without serious rent controls, housing remains unaffordable in our city and landlords will still be able to force us out to make way for people who can afford higher rents. Urgent action is needed to stop social cleansing and the violent displacement of working class people and migrants.”

“This is a victory for everyone fighting for secure housing. This was not a gift from a benevolent government. The collective strength of organised tenants forced them into this concession.

“We’ve fought Section 21 on the front line: in our communities. Door by door and street by street our members put themselves in the way of landlords and bailiffs; physically preventing evictions.

“This is a huge win but there’s more to come. Next are rent controls to ensure that housing becomes a social and human right and not an asset generating profits for a few.

“Solidarity is strength. We know what we’re entitled to and we’re taking what’s ours.”

“Having been evicted using s21 twice in my life, most recently last winter, two days after discovering I was pregnant, I know how brutal and terrifying no fault evictions are. It’s impossible to build a stable, rooted life as a private renter under laws like s21. So government plans to repeal this apaling legislation is a massive victory for the growing renters movement which has fought collectively to make this happen.

“Having landlords that can evict you on a whim, often because they want to put the rent up, is one of the most destructive examples of a housing system that puts the interests of landlords to make a profit above the needs of renters for a home. But repealing is not enough. Unregulated and unaffordable rents mean that most renters work hard to do little other than line their landlords pockets. Even if s21 is repealed, landlords can still use rent hikes to effectively evict tenants. Rent controls are the norm in Europe, and if the Government is serious about improving life for renters, it must follow suit and urgently impose rent controls which bring rents down and make renting affordable.”

“This is an incredibly political victory that comes from the hard work of tenants organising in their communities and a coalition of organisations fighting for change.

“Section 21 has no place in a civil society. It has caused immeasurable distress to our members, in the very worst cases forcing them on to the streets for no fault of their own. The government has taken the right step and we are eager to see what answers they have to tackle the chronic undersupply of truly affordable housing.”